Ever notice that good clinics do not have to talk about and/or send out announcements of “how good they are or how high their success rates are”? ACFS believes this is simply done by reputation and word of mouth that is backed up by accurate and reproducible results over and over again. If you are good at what you do, you do not have to say it; your patients and results will for you.

When the older technologies for chromosome testing using FISH were replaced by the newer technologies of PCR and 23-Chromosome Microarray, Arizona Center for Fertility Studies realized early on that this technology would be a very important key to the improved success of IVF and would result in higher success rates and lower miscarriage rates. This journey started about 7 years ago, and ACFS was one of the first clinics in the U.S. to “see” the true value of chromosome testing or PGS (preimplantation genetic screening). We subsequently began to offer PGS to all our patients doing IVF.

Although truly revolutionary in producing better outcomes, it was early criticized as “not making a difference in IVF outcomes, and would damage the embryo.” Early PGS was done on day 3 embryos using weak acids to dissolve the egg’s outer wall (or zona pellucida). Early on, these techniques concerned us at ACFS, and although we never damaged a single embryo, the use of a weak acid anywhere near the embryo was worrisome.

But something much bigger changed our minds in how this new technology should be used. First, ACFS was driven to be successful on each patient’s first attempt at IVF (for many obvious reasons). Second, we had a number of biopsied day 3 embryos that made “beautiful” day 5 embryos or blastocysts but came back chromosomally abnormal.

There had been speculation that embryos could “self-correct,” but there was no scientific proof of that. With patients’ permission and informed consent, ACFS asked to re-biopsy these abnormal day 5 blastocysts to see what percentage of them, if any, had “self-corrected.” In collaboration with 3 other clinics, we found that in the first 24 day 5-6 embryos re-biopsied, 64% had “self-corrected” and were read as normal. ACFS, along with 3 other major clinics, published what we believed at the time to be the first scientific paper showing the embryos could “self-correct” by day 5-6 of development.

That was the last time ACFS did day 3 embryo biopsies. However, this change demanded and pushed ACFS to get proficient with culturing embryos out to the blastocyst stage, using the new and expensive laser technology to biopsy day 5-6 embryos, replacing the use of weak acids (thank god).

Since PGS results could take up to a week to get back, ACFS needed to get proficient in embryo freezing or vitrification. This actually worked to ACFS advantage because we were starting to realize that frozen embryo transfers (FET) were showing up to 30% higher pregnancy rates and significantly reduced the risks of ovarian hyperstimulation syndrome (OHSS), allowing ACFS to use more aggressive stimulation protocols that proved instrumental in recovering increased quality and quantity of eggs with resulting higher numbers of “quality” embryos for transfer and more remaining to cryopreserve. 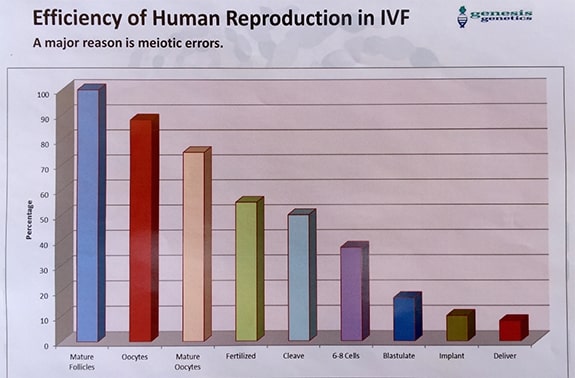 The above chart shows the inefficiency of human reproduction and thus supports ACFS findings and experience of “improving” the odds with 23-Chromosome Microarray or PGS testing on all patients undergoing IVF.

But there was one very big problem. Like FISH before it, 23-Chromosome Microarray testing was expensive, in the neighborhood of $6000-7000; most patients, although very clear of its benefits, could not afford the cost on top of the already expensive IVF procedure.

Well, how did you get people to do what you think is important? Easy: make it worth their while. In an unprecedented decision over 5+ years ago, ACFS decided not to charge the cost for PGS testing; and as far as we know, we are the only IVF clinic in the United States to do so. In other words, ACFS “does not make a dime” on chromosome testing or PGS. Actually, we make less money because on the outside chance there are no embryos to transfer, we do charge or collect the transfer fee.

Sometimes there are normal embryos to transfer but no remaining normal ones to cryopreserve, so we lose our freezing and storage fees. ACFS freeze day 5-6 embryos after undergoing PGS biopsy at no charge. The only freezing charges come if there are extra normal embryos after the FET (which, of course, is a good thing because it gives couples future attempts to have more children without going through the entire process again, and thus saves a significant amount of time, money, and emotions, and they have chromosomally-normal embryos from when they were younger).

With ACFS success rates, this decision to do PGS at no cost did not make any “business” sense. We could charge “what we wanted,” and unfortunately, most clinics do, and they do not have anywhere near the same success rates as us. There was only one thing in the way. A promise ACFS made at its inception in 1982 — a strong and undying commitment to helping couples achieve their most cherished dreams — a baby. A promise and commitment we have kept for over 30 years.

It is ACFS’ very strong belief that if you have something that good, you need to “give it away.” And still, many clinics say that PGS does not “really” make a difference in overall outcomes and the procedure “might“ damage the embryo. Sorry, but that’s code for, “we don’t do it for a myriad of reasons I think you can probably figure out.” With all due respect, ACFS, could not disagree more forcibly. Actually, current literature in 2015 is clearly showing that PGS “does” make a difference in not only pregnancy rates but also reducing miscarriage rates. No surprise to ACFS.

How nice would it be to find and only transfer chromosomally-normal embryos rather than just transferring 1-2 untested day 3 or day 5 embryos and “hoping for the best” and freezing all the remaining ones, not knowing if they were chromosomally “normal” or not? And then possibly doing multiple FET again and again, “hoping” for the best and running the “real” risk of it not working (most chromosome abnormal embryos do not even implant).

The “real” risk of a miscarriage (70-80% of miscarriages are due to chromosome abnormalities); or god forbid, the risk of a chromosome abnormality resulting in a live birth like a Down’s Syndrome baby or worse. How nice would it be for any couple, young or old, not to worry about the risk of having a chromosomally abnormal pregnancy and having to face that “so very hard” decision of whether or not to terminate the pregnancy? PGS effectively eliminates all that worry. 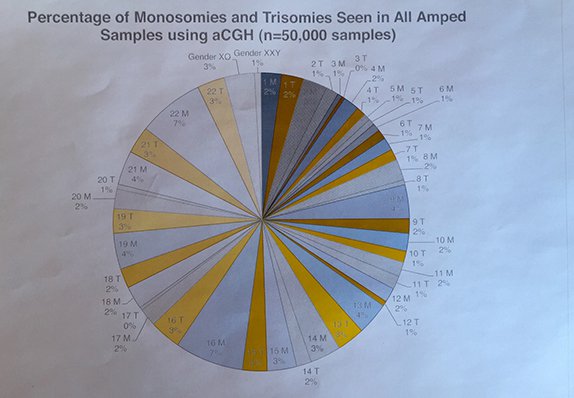 Percentage of Monosomies (only one chromosome instead of two) and Trisomies (third chromosomes instead of two, with Trisomy 21 or Down’s being one of the most common) seen in approximately 50,000 embryo biopsies.

We can obtain eggs and embryos from almost any patient with functional ovaries because we’re good at what we do. Where we lose control is whether or not those eggs/embryos are chromosomally-normal. Age factors into those chances more than any other factor. That said, when we are able to help our patients obtain one or more chromosomally-normal embryos, regardless of age, we can be confident that they will achieve pregnancy more than 80% of the time. Click here to see our current success rates with IVF PGT.