What is Intrauterine Insemination? 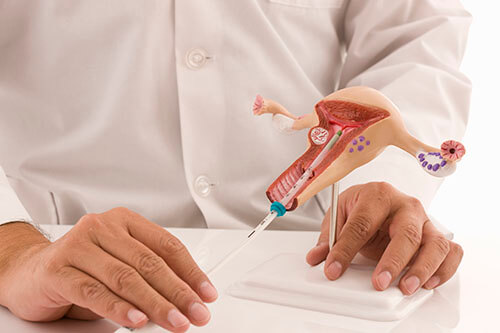 Intrauterine Insemination (IUI) is a procedure used to deliver sperm to the upper reproductive tract. The goal of IUI is to enhance the opportunity for sperm and egg(s) to meet and potentially enable successful conception and ongoing pregnancy.

In preparation for IUI, the sperm sample is “washed,” or passed through a density gradient, to concentrate greater numbers of live, swimming sperm into a small volume of fluid that can be placed directly into the uterus. Washing is necessary to separate the good sperm from prostatic secretions and seminal fluids, which can cause severe cramping and allergic reactions if they are introduced into the uterus with unwashed semen.

In order for IUI to be effective, the woman must ovulate in the IUI cycle and have at least one open fallopian tube. The man must have enough motile sperm in the ejaculate to provide reasonable chances for success. Ideally, there should be greater than 5-10 million motile sperm in the sperm sample after washing. Intrauterine insemination is commonly indicated in the following situations:

Intrauterine Insemination (IUI) can be performed in a natural cycle or with fertility medications. Generally, women will produce a single egg without medications and can be induced to make two or more eggs with the use of fertility drugs. The medications commonly used for ovarian stimulation are oral clomiphene (Clomid) and injectable gonadotropins (Follistim, Gonal-F, and Menopur). Letrozole (Femara) is an oral medication used to treat estrogen receptor-positive breast cancer that may be prescribed as an “off label” alternative to clomiphene.

Natural cycle insemination is most appropriate when there are no known female fertility issues apart from a lack of sperm exposure. Success rates can approach the 20-25% chances per cycle that we see for natural fertility with optimally timed intercourse

IUI should occur at or around the time of ovulation, and being a little early is better than being too late. The timing of IUI can be determined using ultrasound, blood or urine luteinizing hormone (LH) testing, and hCG trigger. Due to the short half-life of the ovulation signal, LH, we use ultrasound monitoring and time the insemination procedure to a natural LH surge or hCG trigger, ensuring that the optimal window for IUI is not missed.

Day 1 of the cycle is the first day of the menstrual period. We ask patients to call us when their cycle starts and generally schedule them for a baseline ultrasound before day 3-5. If there are no ovarian cysts, medications may be started between days 3 and 5, and follow up ultrasound will be scheduled no later than day 10-11 and as often as required thereafter to see how follicle growth is progressing. In general, IUI will be performed the day after a positive urine ovulation predictor kit (OPK), two days after a serum LH rise, or 24-42 hours after hCG trigger (administered when at least one lead follicle is greater than 16-17 mm in size). Most women who have close to a 28-day natural cycle will undergo IUI between cycle day 13 and 16 of a medicated cycle.

IUI will be scheduled for a specific time on the predicted day of ovulation. It is normal for women to feel some fullness and cramping before, during, and after ovulation. Some patients report that they can feel when they are ovulating, whereas others may not. Approximately 1 hour prior to the insemination, a sperm sample is obtained or thawed and prepared for the IUI. The IUI procedure itself is performed in the office. It is not typically painful but does require the use of a speculum to visualize the cervix, similar to the vaginal examination required for a pap smear. We may ask that you keep your bladder full to help straighten the angle of the uterus for the IUI. After the speculum is placed, a thin flexible catheter is guided through the opening of the uterus, or cervix, and the washed sperm sample is carefully injected into the uterine cavity with a syringe. There is no scientific evidence to support that rest or specific positions after the insemination improve pregnancy rates, but we allow our patients to rest comfortably for 10 minutes following the procedure. We usually start progesterone support 1-2 days after the insemination. Intercourse is allowed after the IUI if desired, and a pregnancy test is done 14-16 days later. It is important to note that an hCG trigger will result in a positive pregnancy test until the body has completely metabolized the medication.

At ACFS, we do perform IUIs on weekends if that’s when we think you are going to ovulate. Until ovaries start taking weekends off, we will keep coming in on Saturdays and Sundays to do IUIs and IVF egg retrievals as needed. 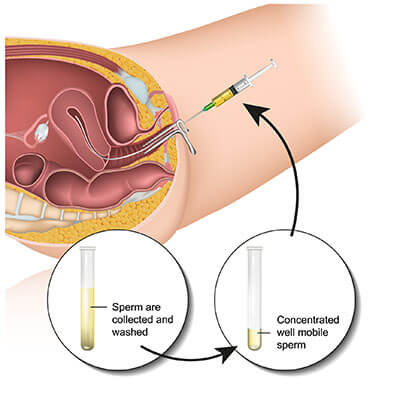 As mentioned previously, IUI success rates vary according to the indication for the IUI. The benchmark to beat is the 20-25% chance of pregnancy that a fertile young couple would have if trying to conceive on their own. Otherwise fertile, young women using IUI due to the need for donor sperm, due to mild semen abnormalities in her male partner, or due to ovulatory disorders will have the highest monthly odds for success. Older couples with “unexplained infertility” who would otherwise have less than a 3% chance of conceiving on their own conceive roughly 10-15% of the time with fertility medications plus IUI. While these chances do not seem stellar by any means, there is significant potential for achieving a pregnancy within 3-6 IUI cycles. Most patients who are going to conceive, however, will do so within the first 3 tries, and failure to conceive within 3-6 tries suggests a more severe form of subfertility that would be better addressed by more aggressive treatment, such as in-vitro fertilization (IVF).

Six cycles of superovulation with IUI will take at least 6 months, will amount to significant out-of-pocket costs, and in most cases will not be able to match the odds of success from a single cycle of IVF.

The question then becomes, “Why does anyone with infertility do IUI?”

Essentially, we are taking a seemingly small chance and gambling on the IUI working because it feels easier, more natural, and less expensive on a per-cycle basis. A decent percentage of our patients are successful with IUI. For those patients, the treatment is 100% successful. However, if IUI does not work after 3-6 cycles, and a patient needs IVF anyway, we cannot recoup the significant time, money, and emotional energy that was lost. The overall cost to have at least one baby is frequently higher with IUI than it is with IVF. In fact, a large study performed in a state with insurance-covered fertility treatments showed that the time and cost to have a child was lower when couples with unexplained infertility who did not get pregnant after 3 rounds of Clomid-IUI fast-tracked to IVF (rather than doing additional IUI cycles). That’s because the majority of patients who did not become pregnant after 3 IUIs failed on the next 3 IUIs and went on to do IVF anyway.

Given these realizations, ACFS does not have a strict policy regarding the number of IUIs that a couple should do prior to considering IVF. We believe in presenting the pros and cons of both choices and allowing patients to make informed decisions. If a patient is a candidate for IUI and wishes to be conservative, we will work with her to try to achieve that pregnancy as quickly and safely as possible, understanding the potential limitations of her chosen treatment. However, if she is not pregnant within 3 IUI attempts, we will revisit the topic of IVF but continue IUI treatment for as long as she wishes. On the other hand, if a patient would like to move to IVF sooner, that is 100% her choice. We will not force her or a partner to try and fail at any set number of IUIs before allowing them to choose a treatment option with statistically superior success rates. Fast-tracking to IVF may be particularly advantageous for those with more than a 2-year history of infertility, those with a history of chlamydial infection or PID, and women aged 30 or older who may benefit from both chromosome testing and embryo banking for future pregnancies.

If you want to learn more about intrauterine insemination (IUI), call your ACFS fertility team today at (480) 860-4792.