The advent of the laser has enabled the development of precision techniques to manipulate embryos for enhanced fertility. Laser-assisted hatching (LAH) can potentially enhance implantation/pregnancy rates, or reverse a history of failed embryo implantation into the uterine wall.

The specialists at Arizona Center for Fertility Studies strongly believe that laser technology is state of the art technology for any embryos that undergo Assisted Hatching (AH), embryo biopsy for Chromosome Abnormality / Single Gene Mutations or Gender or Sex Selection, and for pre-transfer of Cryopreserved or Frozen Embryos (FET).

Picture of a day 3 eight-cell embryo about to undergo laser-assisted hatching (arrow, round marker, indicates where the laser beam will penetrate the zona pellucida)

Laser-Assisted Biopsy (LAB) is used at Arizona Center for Fertility Studies to facilitate the removal of a cell or blastomere from an embryo undergoing pre-implantation genetic diagnosis (PGD/PGS) for chromosome testing, single gene mutation testing or gender/sex selection. We use two methods for embryo biopsy:

Blastomere biopsy, the most common embryo biopsy method, involves the removal of one blastomere when the embryo reaches the eight-cell stage, typically at the third day of development. 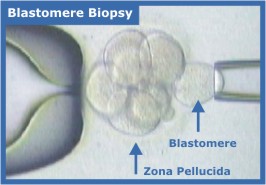 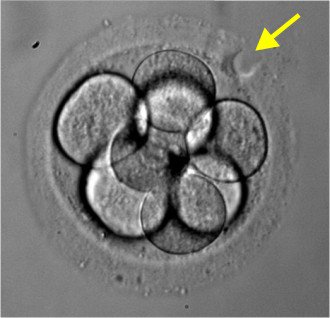 Our experience doing 23-chromosome microarray over the last several years has yielded what seems to be conclusive evidence that embryos can "self-correct". We strongly recommend only doing biopsies on day 5-6 embryos (blastocysts) using laser-directed TE (trophectoderm) biopsy. This means that after the blastocyst is biopsied, it will undergo cryopreservation and be transferred in a subsequent frozen embryo transfer (FET) the following cycle. Although this means that the couple will need to wait a cycle to do the transfer, there are a number of advantages of doing a TE biopsy as opposed to a day 3 biopsy.

In the Arizona Center for Fertility Studies team’s experience, all these advantages collectively produce higher success rates when using PGT, which is why we strongly recommend that all patients undergoing PGT only do TE biopsy, cryopreservation and subsequent next cycle FET. Our out-of-state patients are the one exception, unless they can make a return trip. Although our success rates are still very good with day 3 biopsy, we prefer day 5 TE biopsy.

Laser-Assisted Embryo Biopsy (LAB) is not currently recommended for routine use in all in-vitro fertilization patients at the Arizona Center for Fertility Studies. Several factors should be considered in determining LAB candidacy. We strongly believe that it should be done on all embryos for the following indications:

Yes - because the patented Isotherm Rings™ on our laser prevent the potentially harmful effects of laser drilling heat on blastomeres (the cells of the embryo) adjacent to the zona pellucida (wall of the embryo).

These Isotherm Rings™ appear on our embryologist's computer screen as a series of six concentric circles of varying colors (below) and indicate the maximum temperature reached at the ring’s diameter at various laser pulse durations (2nd picture below). At longer pulse duration, it is apparent that temperatures radiate farther into the center of the embryo, increasing the likelihood of blastomere damage. Our Arizona Center for Fertility Studies embryologist uses the orange ring (second from center) as an indicator of the drill hole size at the selected pulse duration.

With this interactive Isotherm Rings™ feature, our team can "see" the heating and drill hole size, eliminating the temperature "guesswork." 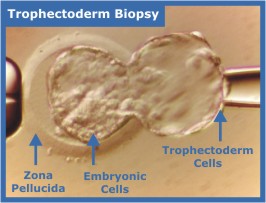 Note how the heat penetrates further into the embryo as the pulse length increases. So even if the actual drill hole (orange ring) does not come close to the blastomeres, the blastomeres are exposed to the heat generated by the laser beam at longer pulse lengths. By using the Isotherm Rings™ feature of our laser, our embryologist can "see" the heat conduction prior to treatment and adjust the pulse length and embryo positioning accordingly, so as NOT to damage the embryo.

We’re excited about offering this new technology in human reproduction that has become the standard at our clinic.

Pictures and some text - Courtesy of Hamilton Thorne