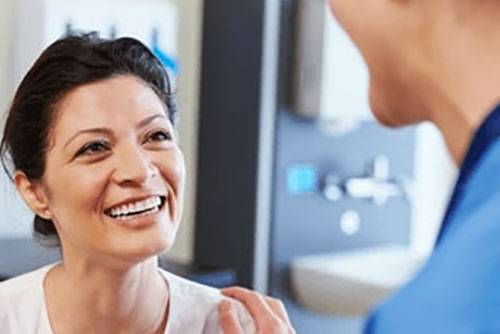 A comprehensive fertility evaluation at ACFS will assess each of the basic requirements for successful reproduction through:

A number of these tests are discussed in more detail below.

Ovarian reserve refers to the number and quality of eggs remaining in a woman’s ovaries. Ovarian reserve strongly corresponds with age - the age of the egg is the biggest determinant of egg quality and the probability that any given egg will fertilize and develop into a healthy, chromosomally normal pregnancy.

Blood tests used to assess ovarian reserve include antimullerian hormone (AMH) levels, follicle-stimulating hormone (FSH), and estradiol levels drawn on the 2nd or 3rd day of the menstrual cycle. AMH is particularly useful because it can be checked throughout a woman’s menstrual cycle and is valid whether or not she is using birth control. In general, we like to see AMH levels of greater than 1 because a higher AMH is associated with a greater number of available eggs and better response to fertility medications. The AMH level correlates with age and ultrasound ovarian follicle counts because the hormone is produced by the cells that line the follicles and help to maintain and develop the eggs. The more follicles a woman has, the higher her AMH, and the more eggs she is likely to produce when given a strong enough dose of fertility medications.

FSH is a less direct measure of ovarian reserve because it is produced by the pituitary gland in the brain. When ovarian function begins to decline with age, FSH levels rise in order to compensate, and day 2-3 estradiol may likewise increase. We, therefore, prefer not to see a day 2-3 FSH of greater than 10-15 or a day 2-3 estradiol level of greater than 80 because these can suggest that the body is working harder to produce an egg each month.

It is important to note that AMH, FSH, and estradiol are not necessarily predictive of natural fertility. If a woman with low AMH or high FSH produces an egg each month and has no other obstacles to fertility, she may still get pregnant. However, if there is a fertility issue, she may have a harder time producing multiple eggs in response to fertility drugs than a woman with normal AMH and FSH. Thus, the tests are best used to predict response to ovarian stimulation, and to provide a snapshot of how a woman’s ovaries are functioning relative to other women her age and compared to her own earlier assessments. They should not be used to predict fertility or, in our opinion, to deny treatment opportunities to patients who have not had a chance to try conceiving with their own eggs.

Thyroid testing is important because abnormal thyroid function can prevent pregnancy or increase the risk of a miscarriage. Thyroid Stimulating Hormone (TSH) is the most sensitive thyroid test, and is elevated in patients with hypothyroidism and decreased in patients with hyperthyroidism. Subclinical hypothyroidism refers to TSH levels that are within the normal range for general health purposes but higher than optimal for fertility and pregnancy. It has been suggested that TSH of greater than 2.5 and corresponding “low-normal” thyroid function can be associated with poor reproductive outcomes, particularly when thyroid autoimmunity is also present. We and many experts, therefore, treat any TSH level greater than 2.5 with thyroid hormone replacement (levothyroxine) and monitor levels carefully before and during pregnancy.

Prolactin (PL) is a hormone secreted by the pituitary gland during pregnancy and lactation. If it is elevated in a non-pregnant state, it can cause symptoms such as milky breast discharge and may interfere with ovarian signaling and ovulation in women and with sperm and testosterone production in men. While there are many factors that can cause an intermittent increase in prolactin, a persistently elevated level is most commonly due to a small benign tumor on the pituitary gland called a microadenoma. Reproductive dysfunction associated with prolactin-secreting microadenomas is easily treated with oral dopamine agonist medications such as bromocriptine and cabergoline.

Hysterosalpingogram (HSG) is an x-ray of the uterus and fallopian tubes used mainly to detect whether the tubes are open or blocked. It can also reveal certain uterine abnormalities, but there are better tests for the uterus itself. HSG is usually performed between days 7-11 of the cycle. A small catheter is placed through the cervix into the uterus. Radio-opaque water-soluble contrast is then slowly injected into the uterus, filling the uterus and fallopian tubes and eventually spilling freely into the pelvis. The test takes approximately 10-15 minutes and can be associated with 1-2 minutes of moderately intense cramping (similar to bad period cramps) during injection of the contrast. Taking an over-the-counter nonsteroidal anti-inflammatory (such as ibuprofen) can help prevent or decrease the discomfort experienced during the test.

The test is important because tubal factors play a role in up to 20% of cases of infertility. Risk factors for tubal disease include previous infection from gonorrhea or chlamydia, pelvic inflammatory disease, previous pelvic or abdominal surgery, known or suspected endometriosis, and infections following childbirth or miscarriage. 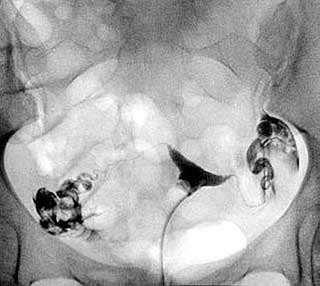 Hysterosalpingogram (HSG) with normal filling of the uterus and both fallopian tubes with contrast (dark on x-ray) and contrast spill into the pelvis confirming that the tubes are open.

A sonohysterogram (SHG) is a form of ultrasound imaging using sterile water or saline solution to highlight the inner contours of the uterus. A catheter is inserted into the uterus as in the HSG above, but SHG provides for a more detailed assessment of the uterine cavity. If there is a “filling defect” such as a polyp or a fibroid, the fluid distending the uterine cavity provides the background contrast needed to make the defect more visible. If any abnormalities are found on SHG, the next step is generally a minimally invasive procedure called hysteroscopy. This procedure allows for direct identification and removal of any pathology suggested by the SHG using a small camera. 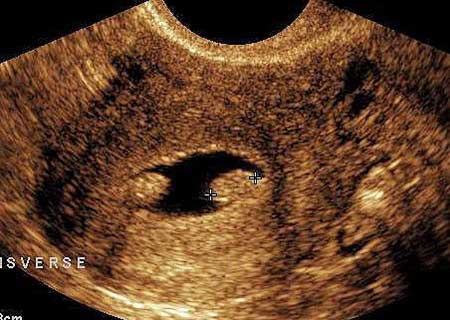 Sonohysterogram (SHG) showing filling defects, likely benign polyps, which would be removed by a hysteroscopy procedure.

Complete Semen Analysis (SA) is a key component of any fertility evaluation. The sperm sample is typically collected by masturbation after 2-7 days of abstinence. The sample is ejaculated into a sterile cup and then evaluated for semen volume, sperm concentration, total count, motility (percent moving), progressive motility (forward speed), morphology (shape), the presence of white blood cells (which can indicate infection), and the time that it takes the sample to liquify. Most standard laboratories, such as Sonora Quest or Labcorp, perform a basic semen analysis without Krueger strict morphology testing. These laboratories provide a good baseline answer regarding the presence or absence of sperm, but a comprehensive semen analysis can provide more insight into the underlying fertility problem and help guide further evaluation and treatment.

Arizona Center for Fertility Studies evaluates and treats male patients who have abnormal semen parameters, and works with urologists who specialize in reproductive services.

The Endometrial Biopsy (EMB) test evaluates the lining of the uterus. A small plastic instrument called a Pipelle is inserted through the cervix and into the uterine cavity, where a small piece of endometrial tissue is removed by suction. The tissue is sent for microscopic and molecular evaluation by a pathologist or a specialized laboratory.

Historically, microscopic evaluation of endometrial tissue was used to assess the development endometrium in response to ovulation and natural progesterone rise. If the endometrial development was delayed, or “out of phase,” compared to accepted standards, patients were diagnosed with a “luteal phase defect” and were often treated with fertility medications and progesterone. Given the poor reliability and reproducibility of endometrial “dating” by routine pathologic evaluation and the common use of fertility medications plus progesterone in nearly all patients pursuing fertility treatment, the EMB is now rarely used in routine fertility evaluations.

At ACFS, we primarily use EMB to diagnose inflammation of the lining (endometritis), and for a newer molecular test related to embryo implantation called an endometrial receptivity analysis (ERA). The ERA looks at the genes that are expressed by the lining of the uterus in order to predict a woman’s ideal window of implantation for embryo transfer.

We offer chlamydia antibody testing because past exposure to chlamydia (which is often asymptomatic) can be associated with tubal damage and poorer chances of conceiving even when the fallopian tubes are shown to be open on HSG. Studies have suggested that couples with unexplained infertility and positive female anti-chlamydia antibodies may achieve better success by fast-tracking to IVF rather than doing multiple cycles of IUI.

Mycoplasma and ureaplasma are bacteria that have historically been associated with infertility, implantation failure, and early pregnancy loss when they are present in the female genetical tract. Most of the time, these bacteria cause no symptoms, and their true role in infertility is questionable unless chronic endometritis or inflammation of the uterine lining is present. Treatment involves a 1-2 week course of antibiotics with a test of cure no sooner than two weeks after the completion of treatment.

Our team at Arizona Center for Fertility Studies offers genetic carrier screening to help parents determine whether they’re at risk for passing an inherited health condition to their children. While it is normal to be a carrier for an inherited genetic condition, it's important to know whether the mother and father (or egg and sperm sources) have a mutation in the same gene. If so, for recessive disorders, there is a 1 in 4 chance that their child will acquire two abnormal gene copies and be affected by the disease. Some disorders - like Fragile X syndrome, a common genetic developmental delay and intellectual disability in males - can also be passed from the mother to male offspring via the x-chromosome. Therefore, we advise testing before pregnancy and genetic counseling to identify any serious risk factors. This makes far more options available to families before, during, and after pregnancy. We can even test embryos created by IVF for specific genetic disorders known to be carried by the parents in order to preferentially select unaffected, healthy embryos for transfer. This is called preimplantation genetic testing (PGT).

If you are interested in a comprehensive fertility evaluation, please call your ACFS fertility team today at (480) 860-4792.