The fallopian tubes, uterus, cervix and upper vagina, develop from two separate tubes, known as mullerian or paramesonephric ducts, which fuse with one another to create one complete system.

When development, fusion, or resorption of these structures are incomplete, the resulting anatomical variants are called mullerian abnormalities.

These variants range from minor variances in the shape of the inner and outer walls of the uterus to complete uterine and vaginal agenesis (absence or failure to develop) or complete duplication of the uterus and vagina.

The actual incidence of all mullerian anomalies in the general population is unknown, but is estimated at 1 in 300 (one reported range was 0.1 to 3.5%). Women with repeated pregnancy loss have a greater 5-10% chance of having a mullerian anomaly.

Some of the most commonly reported mullerian duct anomalies include:

Since the renal (kidney) system and future parts of the axial skeletal system develop in close proximity to the uterine, or mullerian system, during embryonic development, mullerian malformations are frequently associated with abnormalities of the renal and skeletal system.

Any patient with a complex mullerian anomaly or absence all or part of the uterus should have a complete evaluation of their renal (kidney) system to exclude urinary tract abnormalities. 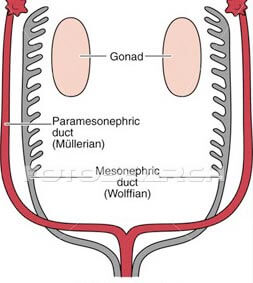 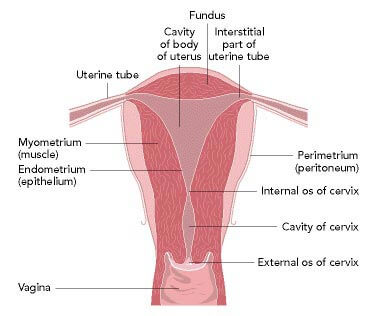 There are a number of ways to make the diagnosis of a mullerian duct anomaly: 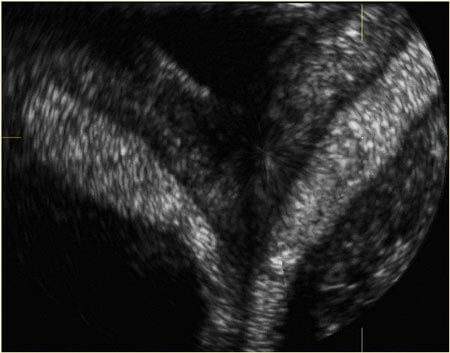 Ultrasound image of a bicornuate uterus 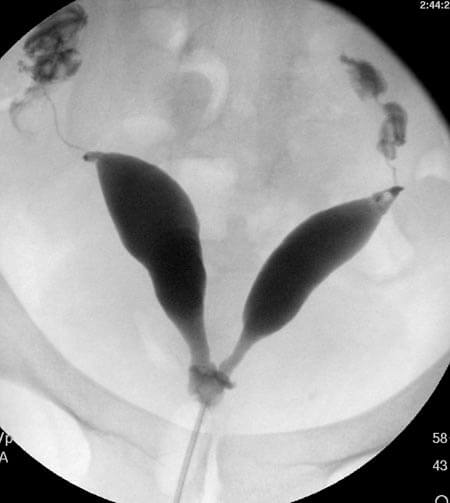 Hysterosalpingogram of a bicornuate uterus or "double uterus"

Mullerian anomalies do not always require surgery. It is just as important to know when to operate as it is to know how to operate.

ACFS has this experience and collaborates with local pediatric gyn surgery specialists to ensure that patients with rare or complex mullerian abnormalities have access to information about their diagnosis and to the best surgical treatment options when necessary.

Below we discuss several of the most common mullerian abnormalities and the surgical treatment options that exist for each. 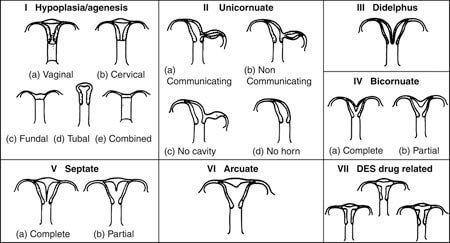 Slight indentation in the fundus or top of the uterus. Does not have any reproductive consequences and is a normal variant that does not require surgical repair.

Only one of the mullerian ducts develops. Thus, the uterine cavity is half the size of a normal cavity. This malformation can increase the risk of 2nd trimester pregnancy loss, preterm delivery, and breech fetal presentation. No correct surgery can be performed, but some patients will note improved outcomes due to the uterine growth that occurs with each successive pregnancy.

Partial or complete lack of disintegration of the inner wall of the mullerian tubes. The remaining partial or complete mullerian duct becomes a septum or band of connective tissue which extends toward the middle of the uterine cavity. The outer contour of the top of the uterus, or fundus, is normal. This septum has a poor blood supply compared to normal uterine tissue and may not adequately support the needs of a developing pregnancy, increasing the risk of infertility and early pregnancy loss. A septate uterus can be corrected with hysteroscopic resection, often under laparoscopic guidance, resulting in a unified uterine cavity and increasing the odds of a successful pregnancy outcome.

Partial or complete lack of disintegration of the inner wall of each mullerian duct. The uterine cavity is divided, as in a septate uterus, but the walls have a normal blood supply and are lined with normal endometrial tissue. The outside top or fundus of the uterus is separate, or divided. The difference between a septate and a bicornuate uterus is either made visually, at laparoscopy or on MRI, where you can distinguish between a unified or divided uterine fundus. Bicornuate uteri are not necessarily associated with infertility or pregnancy loss, but some women will experience mid-trimester pregnancy loss, preterm labor, or fetal malpresentation. In the absence of poor reproductive outcomes, surgery is not usually indicated. However, if a woman is experiencing repeat mid-trimester losses, a bicornuate uterus can be corrected with a reconstructive surgery, called uterine metroplasty, leading to improved pregnancy outcomes.

Underdevelopment of one side of the mullerian duct can result in a much smaller but functioning “uterine horn” that can communicate with the larger uterine horn or be noncommunicating, i.e. obstructed. Occasionally, pregnancy implantation in the underdeveloped uterine horn can lead to miscarriage or preterm delivery. However, a non-communicating horn poses a much greater problem because the menstrual blood has nowhere to go and continues to build up, eventually causing considerable pain and increasing the risk of endometriosis because of the back-flow of menstrual blood into the pelvic cavity. Obstructed horns can be removed laparoscopically to alleviate these symptoms.

A uterus didelphys results from complete duplication of the entire reproductive system with a double uterus, double cervix and sometimes a double vagina. The diagnosis is easy to miss but may be noted when young women start their menstrual cycles and cannot effectively use tampons because they are only inserting them into one of the two hemi-vaginas. Women with a uterus didelphys are typically fertile, but there may be an increased risk for preterm delivery and fetal malpresentation. Surgical unification does not seem to improve pregnancy outcome.

Complete absence of the mullerian system (fallopian tubes, uterus, cervix and upper vagina). It presents in a young woman who has normal onset of secondary sexual characteristics but fails to begin menstruation. Treatment involves the use of dilators or surgery to create a vagina to allow for satisfactory vaginal intercourse. Due to the absence of a uterus, women with MRKH can use IVF with a gestational carrier to achieve pregnancy.

This abnormality was mainly observed after maternal exposure to DES, a drug used in the 50-60's to help prevent miscarriages. One consequence of maternal DES exposure was a T-shaped (or hypoplastic or underdeveloped) uterus in female offspring. This lead to an increased risk of miscarriages when these female offspring attempted pregnancy. The size and shape of the uterine cavity can be improved with hysteroscopic surgery, but severe cases may require the use of a gestational carrier.

Hysterosalpingogram of a T-shaped uterus from DES exposure 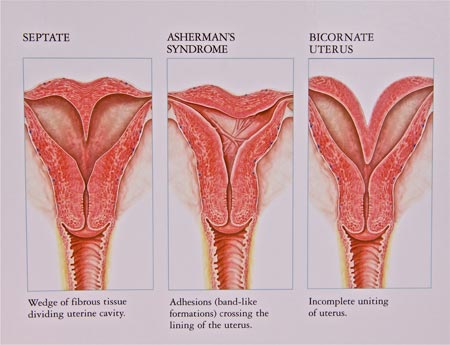 Obstructed outflow tracts (imperforate hymen, transverse vaginal septum, and obstructed hemivaginas) are typically discovered shortly after the onset of menstrual periods when the blockage of the menstrual flow leads to severe cyclical pelvic pain. These can be temporarily managed by stopping the girl’s periods with medical hormonal management, but will require require surgical correction to allow for normal menstruation to occur in the long-term.

If you want to learn more about mullerian anomalies, call your ACFS fertility team today at (480) 860-4792.