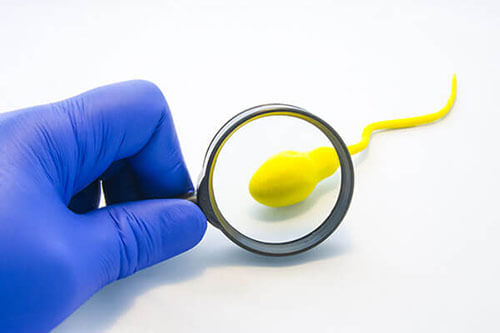 The testes are the male reproductive organs which are primarily responsible for producing sperm and testosterone. Normally functioning testes make millions of sperm daily. A normal ejaculate should contain more than 40 million sperm, although semen parameters vary widely among fertile individuals and can also differ significantly between collections from the same man. Healthy semen parameters with good numbers of strongly swimming sperm provide the best odds that a sperm will reach and fertilize an egg, resulting in conception.

Certain factors may predispose a man to infertility or be associated with difficulty conceiving. These include:

In the case of severe oligospermia or azoospermia, further medical evaluations could be indicated. Most often your doctor will order hormone testing, including FSH, testosterone, and prolactin levels. Sometimes additional genetic testing and urologic referral will be indicated. In some cases of azoospermia, medical treatment can be used to promote sperm production. Other times, sperm may be recovered directly from the testes (MESA/TESA) to permit the use of IVF/ICSI rather than donor sperm.

Semen parameters are crucial for natural fertility and can impact the choice and effectiveness of treatment options. As a general rule, the lower the number and quality of sperm, the closer you need to get the sperm to the egg. The following is a guide to the preferred minimum number of total motile sperm (TMS) for achieving a pregnancy by various methods:

If you want to learn more about male factor infertility, call your ACFS fertility team today at (480) 860-4792.