Diagnostic and operative hysteroscopy is an out-patient procedure performed under general anesthesia, where a surgeon passes a tube-like telescopic (generally about 3-5 mm) called called a hysteroscope, through the vagina and cervix into the uterine cavity. Hysteroscopy can be diagnostic, to evaluate, or operative, to remove pathology, in both gynecologic and reproductive medicine.

The hysteroscopy procedure can help find out what's causing symptoms such as unusual vaginal bleeding or discharge. It can also be used to evaluate and remove intra-uterine filling defects like polyps, which are benign growths of the lining of the uterus or endometrium, and/or fibroids, which are benign growths of the muscle of the uterus. Evaluation of the cavity in a woman experiencing heavy periods, sometimes a warning sign of uterine cancer, can allow for early detection, thus avoiding the need for hysterectomy.

Polyps are benign tissue growths originating from the surface of the uterine lining or endometrium. They are soft and fleshy and are often seen moving during a SHG. Pregnancy does not appear to increase the size of polyps but can increase blood flow to the polyp, making it more vascular. In early pregnancy, because of this increased vascularity, the polyp can break down and bleed. The resulting blood is irritating to the uterine walls and can cause an increase in its contractility, thus resulting in an increased risk of miscarriage. Also, if the endometrial polyps are large, there is a chance the the pregnancy could accidentally implant on the polyp and because the pregnancy does not have a direct blood flow to the uterus you may miscarry.

Fibroids are benign growths of the muscle of the uterus. On SHG and even at hysteroscopy they can sometimes look similar to polyps. The distinction is important because the biggest stimulus to fibroid growth is pregnancy. As a result, the enlarging fibroids can increase the risks of first and second trimester loss, interfere with placentation (development of the placenta) and/or implantation, cause prematurity, premature rupture of the membranes (bag of water) and a breech presentation. Since you can not tell with absolute certainty if the filling defect is a polyp or fibroid, and the removal of both fibroids and polyps requires a hysteroscopy, which is an out-patient surgical procedure, Arizona Center for Fertility Studies is asked many times if the surgery is "necessary". It is sometimes difficult to say exactly if the filling defect will cause the above mentioned problems with certainty, but one thing that Arizona Center for Fertility Studies can say for sure, is that the filling defect, whether a polyp or fibroid, will definitely put the woman at increased risk for the above mentioned complications happening. Because of this, it is the strong recommendation of Arizona Center for Fertility Studies, that if a filling defect is foundon SHG, it is removed by hysteroscopy. Than you never have to look back if you do not get pregnant or miscarry, and ask, "was it due to my filling defect and if I had removed it, would I have gotten pregnant or not miscarried"?

In the last 4-5 years, hysteroscopic surgery has experienced a ignificant breakthrough in technology on how the procedure can be done. This is the use of morcellation technology. Having been used in orthopedic surgery, the hysteroscopic morcellator can simultaneously cut and aspirate tissue; thus, greatly reducing operating time, being able to remove large fibroids that previously were so big and difficult that they had to be removed by an open incision, collect the entire specimen in a trap to be sent to pathology for confirmation, and eliminating pieces of tissue floating in the endometrial cavity sometimes interfering with visualization.

The morcellator works on a mechanical design and eliminates the risk of electrical energy in the uterus and thermal damage to surrounding normal endometrial tissue, which can occur when other types of hysteroscopic instruments are used. Tissue is cut and captured under continuous visualization to ensure efficient and complete removal of the entire filling defect, whether it is a polyp or fibroid. Targeted, visualized treatment reduces the risks of endometrial damage, provides greater control over" blind procedures", where not all of the filling defect can initially be visualized, and greatly reduces the risk of uterine perforation, since the tip of the morcellatoris blunt, as well as the entire shaft of the instrument, except for a small window, where the cutting blade is. It also works with an extremely accurate fluid management system that tracks the amount of fluid going into and out of the patient. This is especially critical during a longer procedure, like the removal of a large fibroid, where it is very important to avoid patient fluid overload.

At Arizona Center for Fertility Studies, hysteroscopic morcellation has reduced procedures that would have taken 1-2 hours, if they could be done, down to 25-35 minutes with minimum to no damage to the uterus and surrounding tissue. The primary goal with hysteroscopic surgery, is not removing the filling defect, but to preserve the integrity and normal architecture of the uterus.

Arizona Center for Fertility Studies believes that no hysteroscopic procedure should be done without the use of the morcellator. It is state-of-the-art technology that has made a profound difference in revolutionizing hysteroscopy and allowing for maximum, safer results.

After the procedure, the woman is in the recovery room for about an hour and then is discharged to home without any restrictions other than to avoid placing anything in the vagina and to refrain from intercourse for a week. She might have light bleeding or spotting, as well as some mild cramping for the next day or so after the hysteroscopic morcellation removal of the filling defect. This is because no cautery was done, so as to avoid causing any scar tissue development on the uterine lining, that could later interfere with implantation or cause an early miscarriage.

Arizona Center for Fertility Studies has a tremendous amount of experience and expertise with hysteroscopic morcellation of filling defects, especially being able to remove large fibroids that ordinarily would not be able to be removed except with an open incision in the abdomen (laparotomy) and then having to open the uterus.

Complications in experienced hands are rare with hysteroscopic surgery. Side-effects, however, are mostly temporary effects of a successful procedure. After a hysteroscopy you have 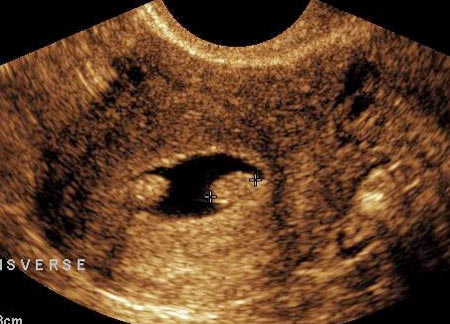 Sonohysterogram (SHG) of an intrauterine filling defect, showing either a polyp or fibroid. Diagnosis is made at hysteroscopy and removed by morcellation

If you want to learn more about diagnostic hysteroscopies, call your ACFS fertility team today at (480) 630-0212.