PGD/PGS: 23 Chromosome Microarray - Why is it done?

As previously mentioned, there are two techniques for testing the chromosomes of a biopsied embryo. Fluorescent In Situ Hybridization (FISH) was the first form of chromosome screening in use. FISH was able to detect twelve of the 23 chromosome pairs: 8, 13, 14, 15, 16, 17, 18, 20, 21, 22, X and Y. This means that a cell from a normal embryo would have 24 spots of light detected when tested.

It is now possible to determine the complete chromosomal composition of an embryo (that is all 23) from testing a single cell. Each chromosome is composed of two strands of DNA that are chemically attracted to each other in a way that holds them together for their entire length. These two strands of DNA are referred to as complementary strands, and it is the chemical attraction between complementary strands that is the basis for testing chromosomes with microarray.

23-chromosome microarray is done by first making many copies of the DNA obtained from the nucleus of the cell that has been removed from the embryo to be tested for a specific genetic defect, a process known as PCR or polymerase chain reaction. The extracted cell is placed in a buffered solution and rapidly heated to break the original DNA strands, and then cooled to reassemble them into copies. Multiple "thermal" cycles eventually produce billions of duplications of a single, targeted DNA sequence. 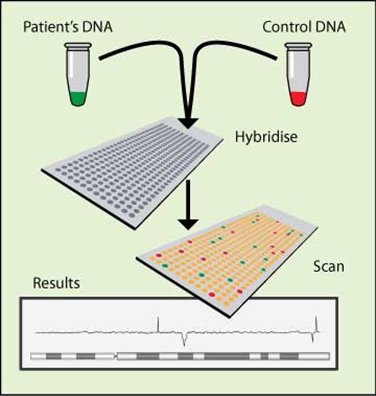 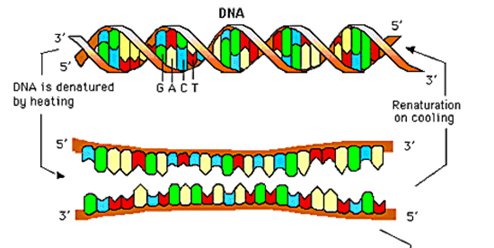 Hybridization: Green labeled cDNA and red labeled ones are mixed together (called the target) and put on the matrix of spotted single-strand DNA (called the probe). The chip is then incubated one night at 60 degrees. At this temperature, a DNA strand encounters the complementary strand, and match together to create a double-strand DNA. The fluorescent DNA will then hybridize on the spotted ones.
Source: Biology Department Genomic Science.

23-chromosome microarray can also be used to diagnose single-gene mutations (the presence or absence of a specific gene in a given embryo). This type of information is useful when one of the prospective parents is known to be a carrier of a gene responsible for a particular disease.

The number of diseases known to be caused by a single gene abnormality is growing as researchers learn more about the composition of the human genome (there are more than 300+ single-gene mutation tests available). Currently, the most frequently tested genes are those giving rise to diseases such as Cystic Fibrosis, Tay-Sachs, Hemophilia, Thalassemia, Marfan Syndrome, and Sickle Cell Disease (among others).

This type of testing is much different than chromosomal testing. Chromosomes are very large compared to single genes. Each gene is composed of a small piece of DNA that in turn is made from combinations of four basic molecules hooked together in a precise sequence. There are many genes present in each chromosome, so to detect whether or not the gene in question is present, it must be separated from the chromosome and then copied millions of times so that there is enough present to be seen by laboratory detectors. This is done by cutting the gene out of the chromosome by enzymes called restriction endonucleases. These enzymes will dissolve the attachment of the gene to the chromosome in a very precise manner so that only the sequence of DNA that is needed will come out. This piece of DNA corresponding to the gene in question is then put through PCR. These amplified replications can then be tested for more than 300 single gene mutations.

Numerical chromosome irregularities (aneuploidies) are common in early human embryos and significantly contribute to implantation failure as well as to early pregnancy loss.

Although the sperm certainly contributes, it is primarily the oocyte that is the driving force in the establishment of embryo competence. The karyotype of the mature oocyte (MII) has emerged as being the most important single determinant of oocyte developmental competence, with aneuploid oocytes rendered unfertilizable, arresting at various stages after fertilization, producing embryos that fail to implant, resulting in early miscarriages, or producing a variety of chromosomal birth defects.

Traditional karyotyping of metaphase chromosomes using commercially available FISH is too inefficient and unreliable at the single-cell level to be of practical use in fresh In-Vitro Fertilization (IVF). Although widely used to identify embryo chromosome irregularities, FISH is of limited value because only a few chromosomes can be identified in each cell (usually X, Y, 13, 15, 16, 18, 21, and 22). An attempt to increase the number of chromosomes analyzed by simultaneously adding more FISH probes reduces the accuracy of differentiating between various chromosomal elements and can lead to misdiagnosis. The matter is further complicated by the fact that the chromosome probes used in commercial FISH were designed to detect aneuploidies involved in spontaneous miscarriages, not necessarily the often lethal chromosomal aneuploidies that lead to dysfunctional embryogenesis and failed implantation.

Although helpful, assessment of embryo morphology with phase-contrast microscopy fails to provide reliable information by which to define the developmental competence of the embryo.

Newer technologies such as 23-chromosome microarray facilitate single-cell karyotyping. The technique both enumerates and provides a comprehensive assessment of each chromosome, thereby identifying breakages and even partial aneuploidies.

While clearly a major breakthrough in the IVF arena, egg/embryo karyotype (chromosome) testing using 23-chromosome microarray is not a panacea. First, an embryo diagnosed to have all its chromosomes (euploid) through egg and/or embryo microarray testing will turn out to be "incompetent" in about 15% of cases. This is because even chromosomally normal cells upon further division, at times, can generate some aneuploid cells, leading to a condition known as Mosaicism (the presence of both chromosomally normal and abnormal cells) in the blastocyst. Depending on the percentage of aneuploid cells in the advanced embryo (blastocyst), mosaicism might not be lethal. Second, a competent embryo might fail to continue developing because of poor uterine receptivity rather than embryo aneuploidy. Third, embryo transfer (ET) (another rate-limiting factor in IVF) requires a great deal of technical expertise, and there is a wide variation in such expertise.

The above serves to explain why the transfer of "competent" (23-chromosome microarray normal) embryos will result in a live birth rate of 60-70% but not in 100% of cases.