There are many embryo grading systems that embryologists use to evaluate embryos for transfer. The ASRM (American Society of Reproductive Medicine) has attempted to establish a standard grading system, so when a patient or previous clinic is talking about "the quality of the embryos," it can be interpreted and understood by the clinic where she is now at, which is important in trying to understand why her cycle of IVF was unsuccessful and what "changes" can be made to result in a successful outcome. Even with standardized embryo grading scale (which is still not universally used), evaluation and scoring of any stage of embryo development, from fertilization to a hatching blastocyst, is critical to the experience and expertise of the embryologist.

After oocyte (egg recovery), the embryologist will remove the cells surrounding each egg (cumulus cells) and check the egg for maturity. Each mature egg will undergo ICSI and be placed back in the incubator. The following day, eggs will be checked for fertilization, but the fertilized eggs (now single-cell embryos) will not be graded. The embryos will not be checked again until day 3 (cleavage stage) or day 5 (blastocyst stage) depending on when the transfer is planned.

Grading of a day 3 embryo is based on the number of cells that make up the embryo, the amount of fragmentation, and the symmetry of each of the embryo's cells (blastomeres). 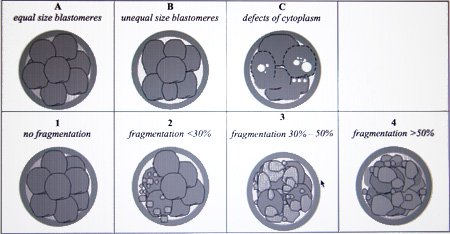 Different stages of scoring a day 3 embryo — evaluating the number of cells, the amount of fragmentation, and symmetry of the cells (blastomeres). (Bączkowski et al., Reproductive Biology, volume 4 No. 1, pgs. 5-22)

In summary, a "perfect" day 3 embryo should be 8AG — eight cells, no fragmentation, and all of the cells are equal and symmetrical. However, embryo quality as evaluated under the microscope is only a crude predictor for pregnancy chances. Any good embryologist will tell you that "even though an embryo looks good, it doesn't mean that it is good" and visa versa.

Scoring of blastocysts is similar, but have a completely different set of scoring criteria. Blastocyst quality is determined by evaluating the outer ring of cells, known as the trophectoderm (TE), which will eventually form the placenta; the inner cell mass (ICM), which will eventually form the fetal portion of the embryo, or baby; and finally, the degree of expansion of the blastocyst cavity and whether or not it has started to "hatch" or break out of its zona pellucida or "shell."

Again, the scoring of a blastocyst depends on the experience and expertise of the embryologist. Like day 3 embryos, scoring of even blastocysts is an imperfect science, and some very nice looking blastocysts do not produce a pregnancy, whereas less than optimal ones do. However, the basic rule of thumb is "that the best of the best embryos" make it to the blastocyst stage, and a very nice blastocyst has a greater chance statistically of producing an ongoing pregnancy than a lesser quality one. 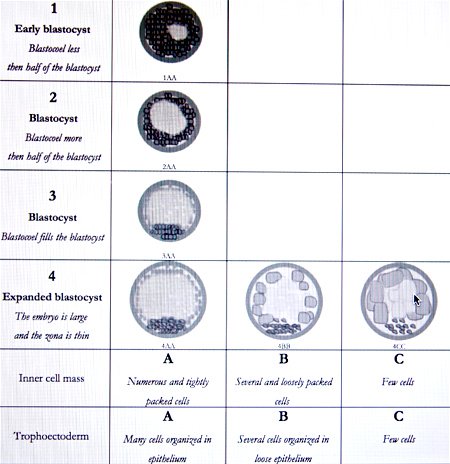 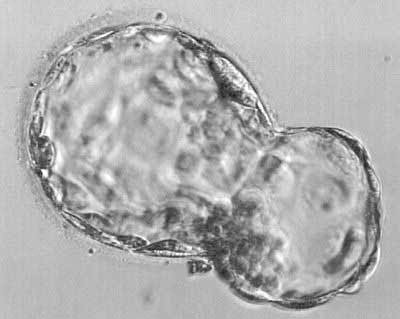 A day 6 "hatching" blastocyst scored 5 AA that is starting to come out of its zona pellucida (or "shell”).

Since there are many other contributing factors involved that we cannot see or identify, embryo scores are, at best, generalizations about "quality" and are often inaccurate. We have seen enough instances when embryos receiving less than A grades have turned into beautiful healthy babies to know that embryo grading is not the final word when it comes to success. Ultimately, the true test of embryo quality is whether it results in a successful pregnancy and live birth.

Letter from a Family

"We've been meaning to write/send pictures for a while, but have been quite busy since the birth of our twins. We sincerely want to thank you for all the love and support you have given us throughout this whole process.

Dr. Nemiro - when we first met you, it was under one of the most difficult times of our life, as I was having an ectopic pregnancy which ultimately required removal of my left tube after having already suffered one miscarriage. All of this had occurred after 2 prior failed IVF attempts with another doctor. Even though you had never met us, you agreed to perform emergency surgery at 8 pm without any hesitation. We were terrified and heartbroken during our 1st visit with you due to our unfortunate circumstances, but you put our minds at ease and assured us you would do all you could to help. Unfortunately, my tube was too damaged to save, and then, you had the unfortunate task of having to tell me that my remaining tube was unlikely to ever result in a viable pregnancy.

Following the surgery, we were totally devastated and without hope. I felt I didn't want to go on if I couldn't bear children, but you convinced us to give IVF another try, with a more aggressive drug protocol than had been previously utilized.

We'll never forget the night you transferred our embryos. You told us they all ‘looked’ good, but that 2 looked particularly good. We knew from that moment that we were finally going to achieve our dream of having children. The rest is history - we now have two beautiful, healthy babies, and we just wanted to express our sincere gratitude to you and your staff.

Everyone in your office was always so supportive and compassionate. Even after achieving pregnancy, I had weekly, sometimes daily ‘scares’ due to bleeding during my first trimester. Everyone always took the time to reassure me and give me as many ultrasounds as I felt I needed to put my mind at ease, and every time I thought my pregnancy had ended, I was assured my babies were still very much alive and thriving.

Thanks again for everything and for helping us along on our journey. Love."