PGD/PGS: 23 Chromosome Microarray - How is it done?

For the genetic makeup of an embryo to be determined prior to embryo transfer, there are two separate steps which are important. The first of these is embryo biopsy.

In most clinics doing PGD/PGS, the embryo is biopsied on the third day following oocyte retrieval, when it is at the six to eight cell stage. The procedure used is similar to that for Assisted Hatching (AH), where an opening is made in the outer shell of the embryo. The opening is somewhat larger than the one made for AH because it is necessary to remove one cell from the embryo for testing.

This is an extremely delicate procedure, for the removal of cells from an embryo at this stage may damage the embryo and prevent it from developing further. Many clinics are still using acid to make this hole in the embryo wall. Arizona Center for Fertility Studies has done thousands of embryo biopsies without ever damaging a single embryo. It is done by state-of-the-art laser directed biopsy, not acid. If the embryo has been biopsied on day 3, there are about 48 hours for the testing to be completed before the embryo must be transferred. The embryo is allowed to develop to the blastocyst stage during these 48-hours. 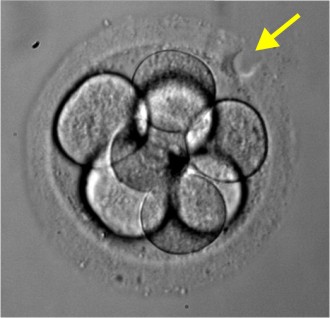 Picture of a day 3 eight-cell embryo about to undergo laser-assisted hatching (arrow, round marker, indicates where the laser beam will penetrate the zona pellucida).

Alternatively, cells can be removed from embryos at the blastocyst stage. Arizona Center for Fertility Studies is one of a handful of clinics in the country that can safely biopsy cells from a blastocyst (TE or trophectoderm biopsy). This allows more cells to be used for testing but requires freezing the embryos after biopsy since the results of the genetic testing could not be obtained before the embryo transfer must be performed. 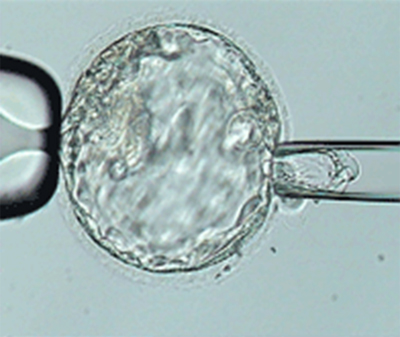 TE or trophectoderm biopsy of a normal-looking blastocyst at Arizona Center for Fertility Studies ART-IVF laboratory.

Up to now, chromosomally abnormal embryos detected by either FISH (old technology) or 23-chromosome microarray (what Arizona Center for Fertility Studies considers to be state-of-the-art technology) are not recommended for transfer and are to be discarded. There are some speculation and early preliminary data to suggest that a chromosomally abnormal day 3 embryos may "self-correct" or normalize by the blastocyst stage.

Arizona Center for Fertility Studies was one of 4 major clinics that participated in what may be the first or one of the first studies to show that abnormal day 3 embryos can "self-correct" by the time they reach a blastocyst-stage.

Arizona Center for Fertility Studies’ initial and follow-up data clearly show embryos biopsied on day 3 that come back abnormal on day 5-6 but made nice looking blastocysts. When re-biopsied using laser directed trophectoderm (TE) biopsy, they had a high percentage of "self-correction." "Self-correction" probably does not occur if day 3 embryos fail to develop normally. This makes sense since a normal complement of chromosomes is needed to direct the normal morphological development of an embryo.

In summary, if abnormal day 3 embryos produce developmentally normal-appearing blastocysts, our team at Arizona Center for Fertility Studies now has evidence that the embryo may have "self-corrected" and is chromosomally competent.