What is Intracytoplasmic Sperm Injection (ICSI)?

ICSI is an acronym for intracytoplasmic sperm injection, an IVF laboratory procedure in which a single sperm is selected and injected into an egg. ICSI is commonly recommended for:

Amazingly, the development and perfection of Intracytoplasmic Sperm Injection (ICSI) has essentially eliminated male infertility in cases where any number of viable sperm are present.

A standard cycle of In-Vitro Fertilization (IVF) is done and unfertilized eggs are immediately placed in an incubator with controlled levels of CO2(carbon dioxide), O2 (oxygen) and N2 (nitrogen).

After approximately 5-6 hours the eggs are checked for maturity. Only eggs that are sufficiently mature to accept sperm will undergo ICSI.

Human eggs are one of the only species of eggs that can mature in-vitro, or in culture outside the body. By allowing the aspirated eggs to "spend" time in the incubator, some of the eggs that were not yet mature can mature in-vitro and undergo ICSI and achieve successful fertilization and normal embryo development. If the eggs are prepared for ICSI immediately after transvaginal aspiration, there is an increased chance that some will still be immature and not be able to be used, decreasing the available number of eggs that can became fertilized and produce embryos.

The Intracytoplasmic Sperm Injection (ICSI) process is complicated and requires a high level of experience and expertise to obtain high fertilization rates. At Arizona Center for Fertility Studies, our embryologist is highly skilled and achieves normal fertilization for greater than 90% of the mature oocytes that he injects.

The Intracytoplasmic Sperm Injection (ICSI) process is done by first identifying all mature eggs after the initial recovery and incubation period. Each egg is then gently "pick-up" by a micro-holding pipette. A single sperm is than evaluated, under high magnification, for normal morphologic characteristics, and then picked up by a second injection micropipette. Using sophisticated micromanipulators, the sperm is injected through the outer wall of the egg (zona pellucida) and egg membrane (oolema) and into the cytoplasm of the egg. The egg is placed back into the incubator.

Fertilization occurs in 4-6 hours in humans but there are no visible signs until approximately 17-18 hours later. The first signs that fertilization have occurred visibly is the development of two round bodies in the center of the egg. The slightly smaller body is the female pronucleus and contains 23 chromosomes that the egg contributes to the embryo. The other round body is the male pronucleus and contains the contribution of 23 chromosomes from the sperm. It is critical that the egg is checked at this point in time for fertilization, because over the next 6 hours or so, the two pronuclei come together in a process known as syngamy, where the two pronuclei join chromosomes, forming one nucleus of 46 chromosomes. 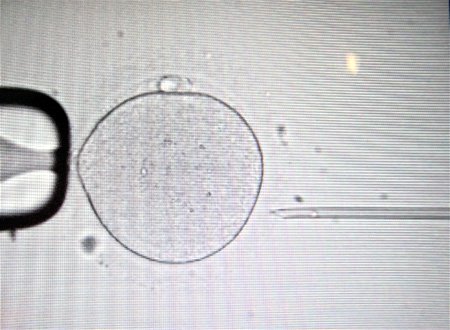 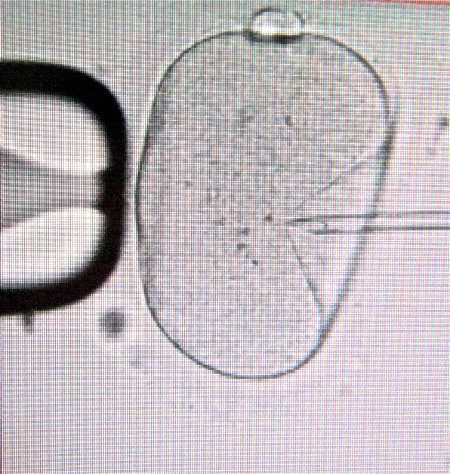 The microinjection pipette has penetrated the outer wall of the egg or zona pellucida and it about to penetrate the oolema, or egg membrane 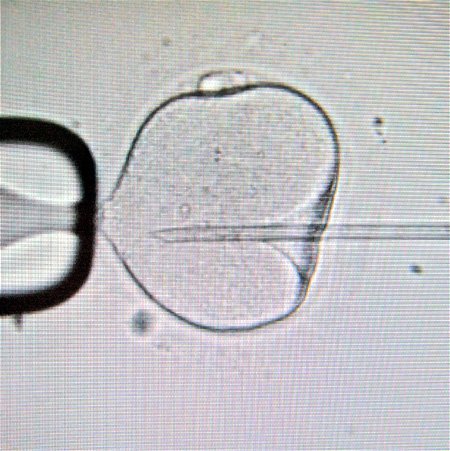 The injecting micropipette with a sperm inside has entered the cytoplasm or center of the egg and is ready to be injected into the egg.

Initially, Arizona Center for Fertility Studies only did Intracytoplasmic Sperm Injection (ICSI) in cases of severe male infertility, where the sperm parameters were so poor that there was a concern that fertilization would not occur in the dish. Now, because a majority of our patients choose IVF with PGT and because our rates of normal fertilization and embryo development are so high with ICSI (greater than 90%) as compared to standard IVF (50-70%), most patients will elect to do Intracytoplasmic Sperm Injection (ICSI) rather than conventional in-vitro fertilization in a dish. This gives most patients the maximum chance of having as many embryos as possible and avoids the approximate 2% chance of having no eggs fertilize with a normal egg yield and good sperm counts.

Pregnancy rates have been shown to be as good as or slightly better with Intracytoplasmic Sperm Injection (ICSI) compared to conventional in-vitro fertilization, but, as one would expect, success is highly dependent on the expertise of the embryologist. An embryologist who is unskilled or inexperienced with ICSI can harm the embryos, leading to poorer rates of fertilization and normal embryo development.

Importantly, when ICSI is performed as it is by the experts at ACFS, there is little evidence to suggest any adverse effects on embryo development, pregnancy, or the health of the children born from IVF/ICSI. One observation that has been noted in the general medical literature is a slightly higher rate of reproductive tract abnormalities (e.g. hypospadias) and infertility in male offspring born to men using ICSI for male factor infertility. These findings are thought to be related to underlying genetic risk factors as opposed to the ICSI procedure itself.

If you want to learn more about our Intracytoplasmic Sperm Injection, call your ACFS fertility team today at (480) 860-4792.